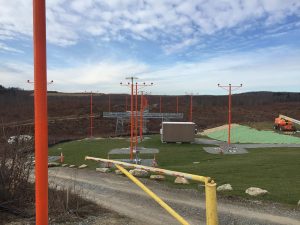 The $32 million CAT III system, paid for by both federal grants and funds from the Massachusetts Port Authority, provides for landings in low-visibility weather conditions which often impact Worcester Regional Airport. When conditions are below visibility requirements of 200 feet of ceiling height and less than 1,800-foot runway visibility, according to Massport, pilots must divert to other airports in the region. The new CAT III system will enable pilots to land planes with a ceiling visibility of 100 feet and a minimal visual range of 660 feet. 1

Among the critical logistical challenges met by the IBEW Local 96/103 contractor are time-sensitive project scheduling due to FAA testing requirements, and providing notice as to aviation requirements and tester schedules. All work is being performed in a manner that eliminates any impact to commercial airline schedules and without disruption to airport operations.

On December 7, 2017, JetBlue announced it will expand service from Worcester Regional Airport to JFK International Airport in New York starting May 3, 2018.