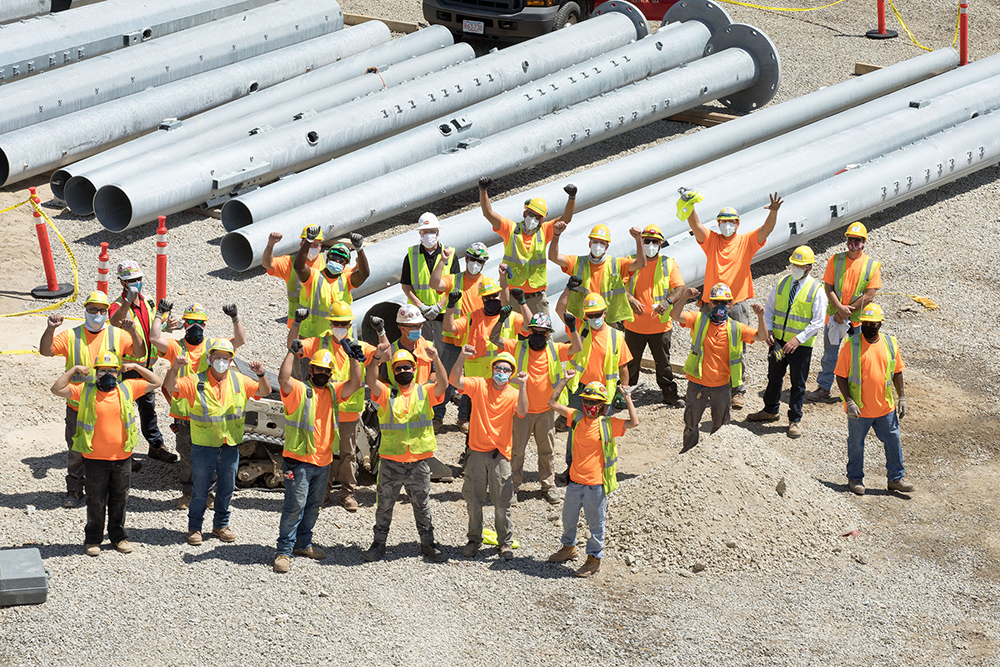 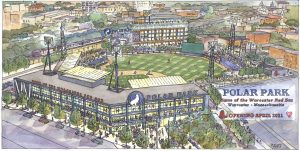 Worcester, MA – On May 15, 2020, Worcester-based IBEW Local 96 signatory contractor, Ostrow Electric Company and its crew of Local 96 electricians started electrical construction work at Polar Park, the new home of the Worcester Red Sox, located in the heart of Worcester’s historic, resurgent Canal District in Kelley Square. The ballpark is the signature project in the current redesign and redevelopment of 18-acres in the Canal District.  Polar Park will have a seating capacity of approximately 9,000 to 10,000 patrons.

The ballpark’s primary power, a 5000A/480V service, will be delivered through two 2000A 480V switchboards. The electrical service includes a busway to allow for a future capacity of 8000A.  Emergency power, in the event of a power outage, will be provided by a 350kW diesel generator.

The facility’s Musco sports lighting system, is comprised of 6 sports lighting poles providing 125 foot candles of light on the field. Two lighting arrays will be shaped as hearts to represent the city of Worcester with heights ranging from 100-120’ in overall height. Two poles mount on the Polar Park stadium structure; the Musco light pole on the third base line will be constructed to pass through the building. The light poles will be equipped with state-of-the-art, energy-saving LED fixtures.  Ostrow and its Local 96 electrical team also are tasked with installing exterior lighting for the stadium.

Life safety systems at Polar Park are of paramount importance and the facility will be equipped with the most advanced, Honeywell Notifier Class A addressable fire alarm system.

The stadium will feature a dynamic, fully-integrated audio-visual (AV) system comprised of speakers, broadcast television and radio broadcast capability, and highlighted by a state-of-the-art LED scoreboard. Installations for linear LED ad signage will also be installed throughout the stadium structure.

The project is an IBEW/NECA Code of Excellence project, a commitment that all Local 96 union electrical workers will perform the highest quality and quantity of work, utilizing their best skills, and exercising the safest work practices.

IBEW Local 96 Business Manager Thomas Maloney said, “The Code of Excellence agreement is a guarantee from IBEW Local 96 and Ostrow Electric Company signed by each member of the workforce, that all union electricians and technicians give 100% effort in delivering on our promise of safety and productivity.  It provides assurance to ownership, the Red Sox organization and the City of Worcester, that the region’s most highly trained and proficient workers will perform to the highest level of professionalism and productivity on the project.”

All Local 96 journeymen and apprentice electricians are required to receive certification of Code of Excellence Training.

Ostrow Electric is working on a project team headed by construction manager, Gilbane-AECOM Hunt, a joint venture, based in Boston, MA. Skanska USA Building is serving as the owner’s project manager for the City of Worcester and the Worcester Red Sox.

Gilbane Building Company, with offices in Boston, throughout the U.S. and world, has considerable experience in ballpark construction, having completed numerous renovation projects at Fenway Park in recent years.  AECOM Hunt, headquartered in Los Angeles, has extensive national sports and ballpark experience, including the construction of nine Triple-A facilities and more than 30 major league ballparks across the country.

The fast-track Polar Park project is slated for completion by April 2021, when the Worcester Red Sox, the Triple A affiliate of the Boston Red Sox, are scheduled to open their 2021 season.

Polar Beverages, a prominent Worcester-based beverage company, has retained the naming rights to the ballpark.

Ostrow Electric VP Sam Ostrow commented, “As a three generation Worcester-based company, Ostrow Electric is proud to be working on the Worcester Red Sox Polar Park project with construction manager Gilbane-AECOM Hunt. The ballpark is designed, and being constructed, as a state-of-the-art facility. The centerpiece project in the redevelopment of the Canal District, it is very significant to the residents of Worcester and Central Massachusetts and the continuing revitalization of our City.”

“The Gilbane-AECOM Hunt team is very pleased to partner with Ostrow Electric and IBEW Local 96 on the Polar Park project. We are thrilled to see their Code of Excellence commitment to delivering this transformative project with the highest level of safety, quality and productivity; they have been an integral part of this project’s success,” said Mike Sormanti, Senior General Superintendent, Gilbane-AECOM Hunt.

All work is being performed with strict adherence to Governor Baker’s COVID-19 construction work safety protocol and guidelines. The project is running just ahead of schedule.

Polar Park, the future home ballpark of the Boston Red Sox, Triple-A affiliate Worcester Red Sox, is owned by the City of Worcester. The City is leasing the ballpark to the club for a 30-year term.  The facility will host at least 120 events annually, including high school and college baseball, road races, fireworks and other community events.