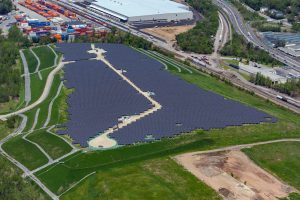 The total project cost of $27 million has an expected payback of only about 6 years, in part due to the higher value of the Solar Renewable Energy Credits (SRECs) that were utilized in the project’s planning and financing stages.

The solar project underwent final testing in July and the facility went online on August 17, 2017.